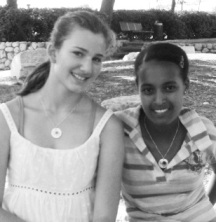 They Saw an Oprah Show on Ethiopia…

After watching an Oprah show focusing on a foundation which provides free reconstructive surgery to Ethiopian girls and women, Helen Lepor and her daughter Marissa of Beverly Hills, California were inspired to help. But after realizing that Oprah viewers immediately donated $3 million dollars, Helen and Marissa wanted to donate to another worthy organization, which was not so fortunate to be the recipient of the Oprah touch. They’d heard about NACOEJ (North American Conference on Ethiopian Jewry) from a family friend and decided to do some research on Ethiopian Jews and on NACOEJ as well. Prior to this, their knowledge about Ethiopian Jews was pretty much restricted to having heard about Operation Solomon (the 1991 airlift of over 14,000 Jews to Israel) as well as other smaller airlifts. During various trips to Israel, they had also become somewhat aware of the assimilation problems Ethiopian Jews faced when they made aliyah to Israel. Their research brought them to the NACOEJ website (www.nacoej.org) where they learned about the educational needs of the Ethiopian-Israeli community and how NACOEJ helps Jews
survive in Ethiopia. They also found out about the Bar/Bat Mitzvah Twinning program and discussed it with their Rabbi, Joel Rembaum, at Temple Beth Am in Los Angeles.

The result was that Marissa twinned with an Ethiopian-Israeli girl named Astela. The Lepor family made a gift to Astela’s school in Rishon LeTzion to help buy necessary educational materials and essential supplies. But the involvement of the family did not stop there. Marissa decided to make Ethiopian Jewry a central theme in her Bat Mitzvah celebration. This began by including a note about NACOEJ with her Bat Mitzvah invitations. Marissa explained that many Ethiopian-Israeli children lacked needed school supplies since their families were
largely unable to afford them. Marissa encouraged all her guests to bring new school supplies to the event. The much-needed items would later be packed into colorful new backpacks that the family purchased. At her Bat Mitzvah, Marissa’s Torah portion was the Exodus and she related it to the modernday exodus of the Jews from Ethiopia to Israel. Marissa also talked about her twin Astela and all the Ethiopian Jews now living in Israel. As a result of their efforts, the Lepor family delivered seven large cartons, filled to the brim with school supplies, to the NACOEJ office in New York for distribution to Ethiopian children in the NACOEJ after-school programs in Israel, known as Limudiah. These specialized programs of intensive education have enabled over 80% of participating Ethiopian children to reach or surpass their grade level, compared to just 35% nationwide. The family’s goal, in addition to celebrating Marissa’s coming of age as a Jewish woman, was to get many people involved in assisting Ethiopian Jews. Helen encourages people to tell their local synagogues to become involved. When it came time to write thank you notes, the Lepors had stamps of Astela and Marissa created and Marissa included the photos of the two of them with every note she wrote. When asked about her family’s participation in the NACOEJ Bar/Bat Mitzvah Twinning program, Helen Lepor said, “It was easy for Marissa to get involved with this project because she knew she was helping Astela and her friends.” “When you know the people involved it becomes very personal. You try to help as much as you can. It is as if you are helping family. NACOEJ is not an anonymous organization without a face. NACOEJ motivates you to want to help, as you know your help is so appreciated and effective.” Perhaps the best part of all occurred when, last summer while visiting Israel, Marissa and her family met Astela at her home in Rishon LeTzion They were so excited to see how happy Astela was living in Israel and to hear how well she was doing in school. It made them feel like they were really making a difference in Astela’s life. It was a very emotional experience for everyone, and Marissa and Astela continue to be pen pals.