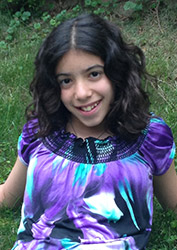 My Mitzvah project is in honor of my brand-new cousin from Addis Ababa, Helina, who was just adopted by my Uncle Keith and Aunt Danielle.  Helina and her parents live in Israel.  She just turned 1 year old this summer.  I will be donating a percentage of gift money to Ethiopian-Israeli children through the North American Conference on Ethiopian Jewry (NACOEJ), which is a non-profit organization founded in 1982.

In 1769, a Scottish explorer stumbled upon the community of Beta Israel, in the northern hills of Ethiopia, where they had been living for centuries. According to the Torah, Jacob had twelve sons, whose descendants became the twelve tribes of Israel. One of his sons with Bilhah, Rachel’s handmaid, was Dan.   Beta Israel is believed to be the lost tribe of Dan, the only known survivors of the ancient Diaspora.

In Israel today, the Ethiopian-Jewish community is an important part of society. However, their struggles are not yet over. Many Ethiopian-Israeli families live below the poverty line and cannot give their children the tools they need to do well in school. They strive to build a future, despite the obstacles.

NACOEJ programs in Israel help Ethiopian students build a bright future by providing them with educational and financial support. NACOEJ believes that a strong education today opens the door to success tomorrow.

Through donations, the NACOEJ provides a nutritious hot lunch for the school children.  The children often come to school without having eaten breakfast and without a bagged lunch.  Without this special lunch, the children would be too weak to study. The NACOEJ has offered needed assistance for thousands of children in grades one through six. The programs enable Ethiopian students to stay on grade level with, or surpass, their non-Ethiopian classmates.

My goal is to raise enough money to feed and assist as many Ethiopian-Israeli children as I can for a whole year.   Thanks for helping me to attain my goal.