For my Bar-Mitzvah project, I am being twinned with Yaacov Ferede, an Ethiopian Jewish boy my age living in Lod, Israel, a very poor town. I am looking forward to getting to know Yaacov.

Ethiopian Jews are possibly part of a lost tribe of Israel. For centuries, worldwide Jews didn’t even know they existed. In 1974, Rabbi Ovadiah Yosef, who was then the Sephardi Chief Rabbi, recognized Ethiopian Jews as Jews, with the right to make aliyah to Israel, and Prime Minister Begin was active on their behalf. In Ethiopia they lived in a very anti-semitic environment. Many of them converted to Christianity to try and have a better life. Others made the pilgrimage on foot across the desert from Ethiopia to Sudan (over 4000 of them died on the way) where they spent long periods in refugee camps waiting to get into Israel. Operation Moses, in 1984, transported about 8000 Jews from Sudan to Israel. In 1991, Israel transported over 14,000 Ethiopian Jews to Israel from Ethiopia in Operation Solomon. 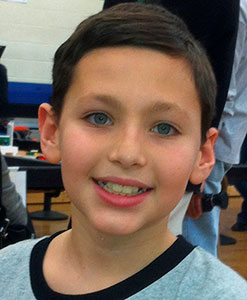 By becoming a twin, and fundraising for the NACOEJ Limudiah Program as my Mitzvah Project, I am providing Ethiopian-Jewish children with after-school learning, nutritious school lunches, school supplies and extra assistance in all subjects.

I am asking for your help to reach my goal of $1,400, which will allow one child to attend the Limudiah Program for the 2014-2015 school year. Thank you so much for helping me in this meaningful cause.