In the 1970′s, the Israeli government authorized the immigration of thousands of Jews who were living in Ethiopia and experiencing famine, disease and war. (Ethiopia at the time prohibited its citizens from emigrating to Israel.)  In 1984, Operation Moses rescued thousands of Ethiopian Jews and brought them to Israel. In 1991, a huge airlift carried 14,500 Jews to Israel in "Operation Solomon." These rescues truly represent Zionism, and demonstrate the purpose for the State of Israel:to provide a home and shelter for Jews around the world. The Ethiopian Aliyah officially finished in 2013, but there are still about 6,000 Ethiopians Jews hoping for permission to make aliyah. 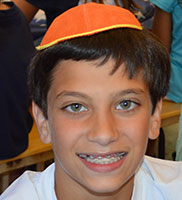 Many of the 130,000 Ethiopian Jews in Israel live in poverty. Some parents can't read, don't speak Hebrew, and can't help their children with school work. That is why for my Bar Mitzvah project, I am raising money for the NACOEJ Limudiah program. This program provides Ethiopian-Jewish school children with intensive after-school education and nutritious lunches. At least 80% of children in the Limudiah program reach or surpass their grade level. The children, their families and the State of Israel all benefit from the program.

I learned about the Limudiah because, through NACOEJ, I have a 6th grade twin named David, an Ethiopian boy living in Lod, Israel who studies in the Limudiah twice a week.  We are pen pals. I look forward to getting to know him and hope to be able to meet him soon in Israel.Thanks for your support.